The Helicopter setup consists of a base on which a long arm is mounted. The arm carries the helicopter body on one end and a counterweight on the other end. The arm can tilt on an elevation axis as well as swivel on a vertical (travel) axis. Quadrature optical encoders mounted on these axes measure the elevation and travel of the arm. The helicopter body, which is mounted at the end of the arm, is free to pitch about the pitch axis. The pitch angle is measured via a third encoder. Two motors with propellers mounted on the helicopter body can generate a force proportional to the voltage applied to them. The force, generated by the propellers, causes the helicopter body to lift off the ground and/or to rotate about the pitch axis. All electrical signals to and from the arm are transmitted via a slipping with eight contacts. The system is also equipped with a motorized lead screw that can drive a mass along the main arm in order to impose known controllable disturbances (the so-called Active Disturbance Option, ADO). 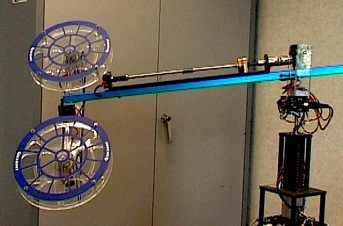 This Helicopter is a Quanser product.