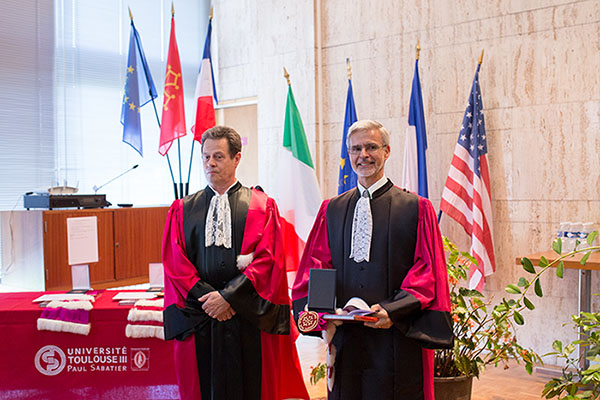 This honorary prestigious title is a mark of distinction that rewards an exceptional journey, at the highest international level. Yves Chabal holds an "chaire d’attractivité" at the Federal University of Toulouse and is currently an associate researcher in the LAAS (Nano-Engineering and integration of metal-Oxide-based nanostructures and their interfaces, GE department), where he works on the development of new generation energy materials.

He is a graduate of Princeton University, he earned his Ph.D. from Cornell University and then joined Bell-Labs for two decades before joining the University. Yves Chabal is now a Professor at the University of Texas at Dallas, USA, where he leads the Department of Materials Science and Engineering. Based on a profound mastery of in situ characterization techniques, particularly infrared spectroscopy, his research on tungsten and silicon surfaces (structure, dynamics, functionalization chemistry) will have an important scientific impact in various application fields, in microelectronics, photonics, advanced materials for energy, hydrogen storage, graphene-based nanostructures ... He found out many phenomena, at the base of the surface oxidation processes and of the self-organization of the organic / inorganic interfaces.

His collaboration with the LAAS started in the 2000s, born from a complementarity between the work of the LAAS in modeling at the atomic scale (Alain Estève) and the fine characterizations of the surface chemistry established by Yves Chabal, a defining moment, in 2010, and the development of a new surface chemistry for silicon (Nature Materials).

This synergy was completed, at the end of the 2000s, by Carole Rossi's skills in highly reactive materials development technologies. Overall, the collaboration has been sanctioned by plenty of projects, ANR/NSF, PUF, CNRS-LIA and currently « chaire d’attractivité » IDEX.