Vertical-cavity surface-emitting lasers (VCSELs) have drained much attention as attractive light sources for short-distance optical interconnects, optical storage, and laser printing. The proven potentials and flexibility of these optoelectronic devices have recently attracted much attention from novel fields of application such as microsensors and biomedical instrumentation. Due to this new interest, new functionalities have now to be developed to further extend the integration capabilities of the VCSELs in optical microsystems. Two aspects have to be addressed in this prospect: the adaptation of the laser source to the microsystem through integrated microoptics, and the diversification and/or association of other optical functionalities such as internal photodetection. Spectral tunability is also a key challenge for developing the use of VCSELs in miniaturized spectroscopy, gas sensing or bio-imaging systems. Our team aims at developing new polymer-based technologies for addressing all these issues. 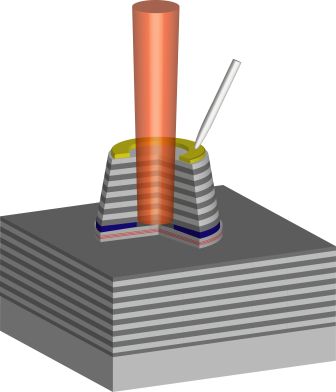 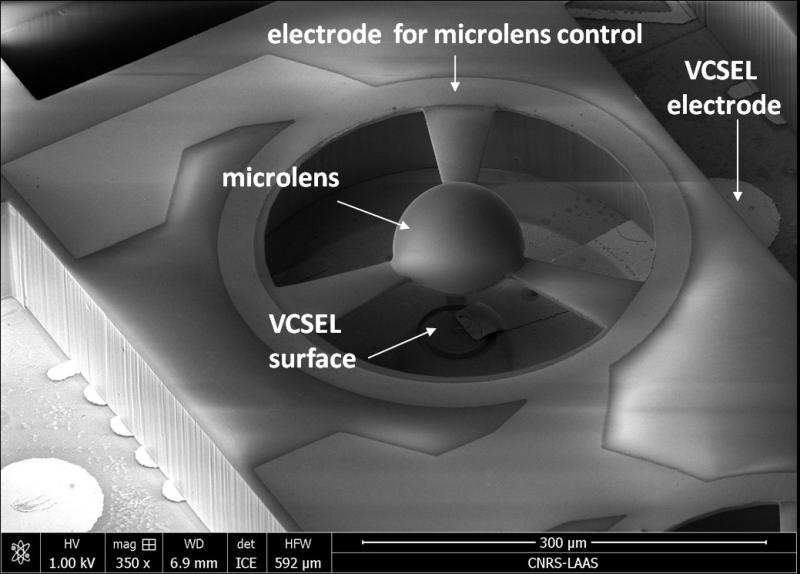 The development of spectrally-tunable VCSELs is of most interest for numerous applications such as WDM, miniaturized spectroscopy, OCT imaging or gas sensing. The classical approach for tunable VCSEL fabrication consists in combining the top mirror with a MEMS (micro electrical-mechanical system). This way, a dynamic change of the thickness of the cavity can be obtained under electrical actuation. An alternative method consists in changing the refractive index of the cavity exploiting an electrooptical material such a nematic liquid crystal (LC). The interest of this new approach is to avoid any moving part in the device.

To this aim, we recently developed a new technology for the fabrication of liquid crystal (LC) polymer microcells that can be integrated in active photonic devices. It is based on the use of a single polymer nanoimprinted grating for LC alignment and of a thick resist material for microcell fabrication. This work was led in collaboration with IMT Atlantique, FOTON and C2N (HYPOCAMP project).

High-finesse optical Fabry-Pérot filter arrays could first be fabricated with this method. A tuning range of 100 nm for a control voltage of only 18V applied was demonstrated. In addition, we measured a low insertion loss on the order of 2 dB, as well as a bandwidth of 0.35 nm, in good agreement with simulations. [B. Sadani et al, IEEE PTL, (2018), 30 (15), pp.1041-1135]. 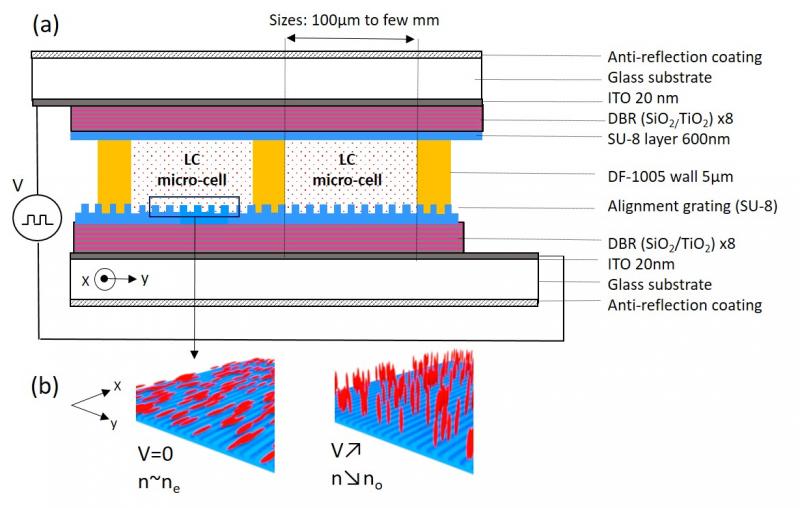 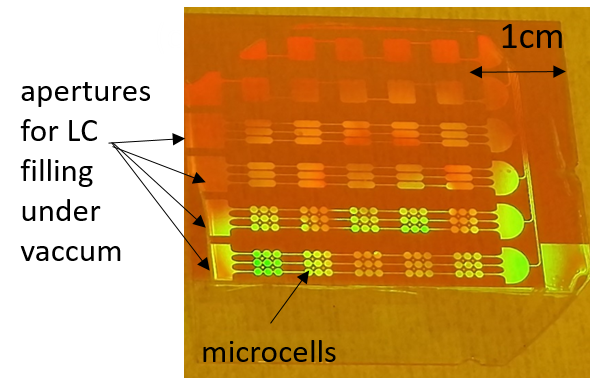 (right) Schematic cross view of tunable optical filter including a  single polymer nanograting for the alignment of the liquid crystal molecules (right)  Top view of filters arrays. These high finesse filters can be tuned up to 100nm for an applied voltage of 18V. 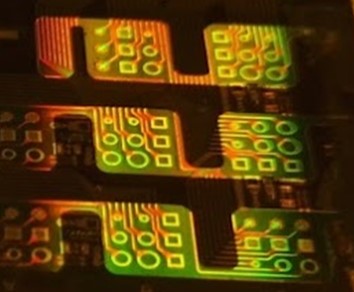 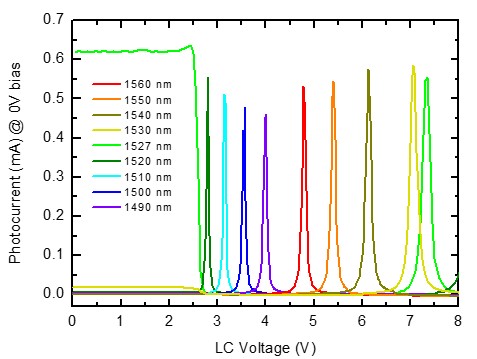 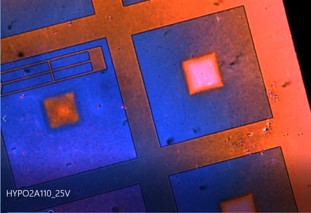 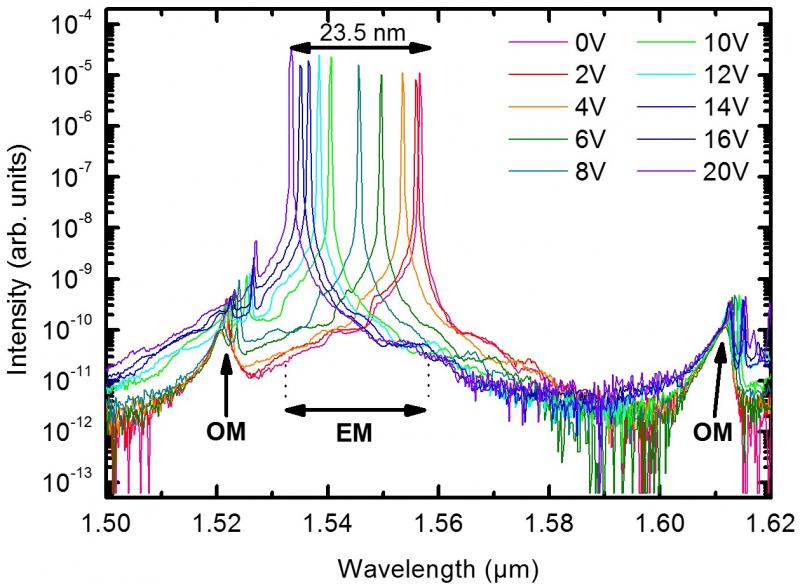 The design and fabrication of 850nm electrically-pumped  tunable LC-VCSELs based on this technology is now under study. The target application is SS-OCT imaging for early diagnostic of skin cancer (DOCT-VCSEL project).

Despite a limited far-field beam divergence, VCSELs sources have more and more to be associated with micro-optical components to enhance their performances or to increase their integration in systems.

In order to integrate microlenses onto VCSEL devices, uniform thick SU-8 pedestals implementing various geometries and sizes were fabricated. Their influence on the deposited microlenses has been studied. A cylindrical shape was found to be the best suited to ensure a self-alignment of the polymer droplets on top of the SU-8 pedestal. The application of this method to the monolithic integration of self-aligned polymer refractive microlenses on VCSELs has led to a significant reduction of the initial beam divergence (in the range [1-2°] instead of 12.5°)[IEEE Phot. Technol. Lett. Vol 21, 1592-1594, 2010]. These results are in good agreement with optical modelling performed with ZEMAX-EE and with more complete simulation tools taking into account laser microcavity  (coll. IEIIT Politecnico Torino). 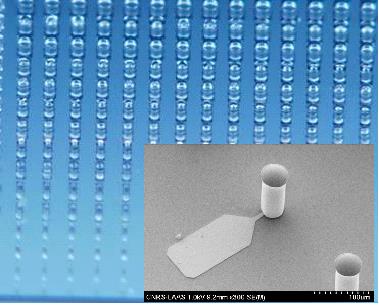 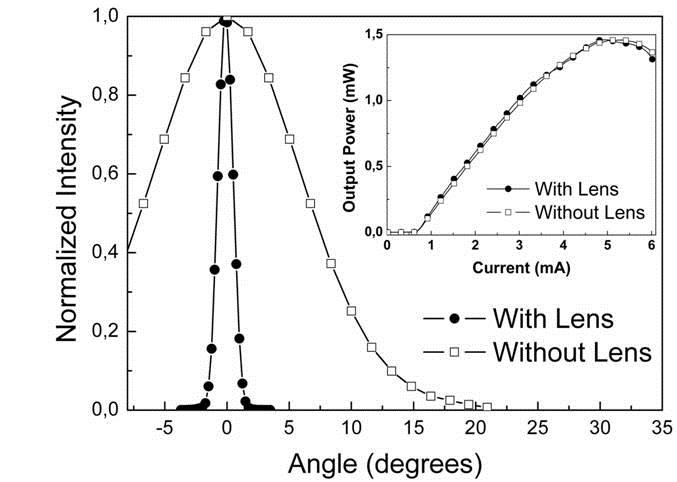 (left) Optical images of SU-8 pedestals with various diameters [30-140µm] with self-positioned liquid droplets on the top  Insert : SEM image of a VCSEL with an integrated microlens  (Right) Beam divergence with and without lens Insert : corresponding L-I curves. 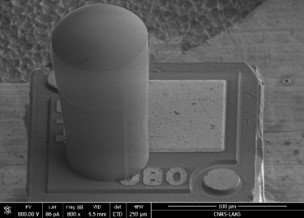 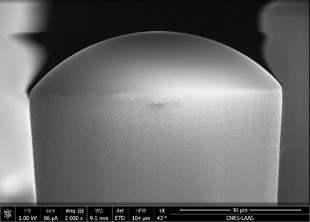 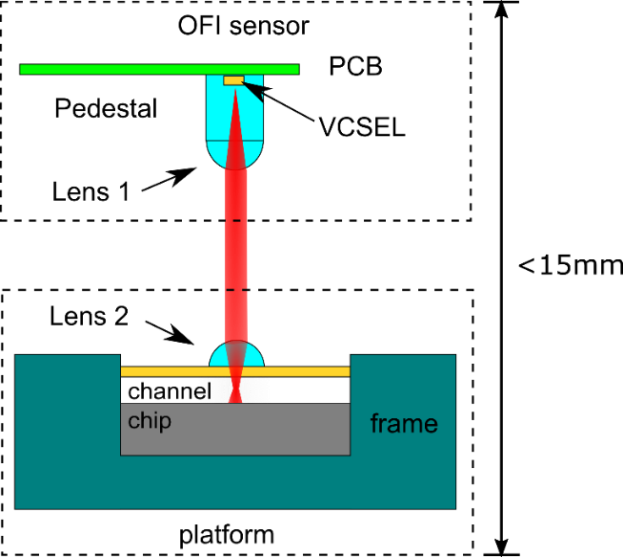 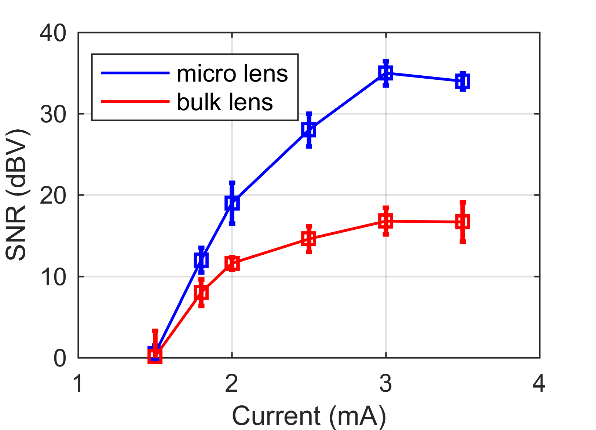 We have demonstrated a self-writing process for integrating self-aligned microtips on VCSELs in the frame of NIROPTICS ANR project (in collaboration with IS2M, Mulhouse and ICD LNIO, Troyes). Our single-step and room temperature technique is based on the use of novel NIR photopolymers [V. Bardinal et al., App. Phys. Lett., 2010]. These materials have been optimized to make possible a precise control of initial thickness prior to photo-fabrication. As a result, limitation of oxygen quenching effects is possible [I. Dika et al, Chem. Phys. Lett, 2011] as well as a collective fabrication at a wafer-scale [D. Barat et al, Micro. Eng., 2013]. Thanks to these improvements, a complete photo-chemical study has been led on different kinds of VCSEL sources. Suitable exposure doses and corresponding dimensions ranges have been determined. The focusing abilities of these tipped-VCSELs have been also evaluated both experimentally and theoretically in collaboration with Pr. Debernardi at IEIIT-CNR Italy, showing that our method can be exploited for the fabrication of compact optical micro-probes for scanning probe microscopy and for near-field optical microscopy  [D. Barat et al, Op. Express 2012].  A new patented method derived from these results is now under investigation for connecting a VCSEL to a single mode fiber exploiting self-alignment mechanisms (3D BEAM FLEX ANR project). 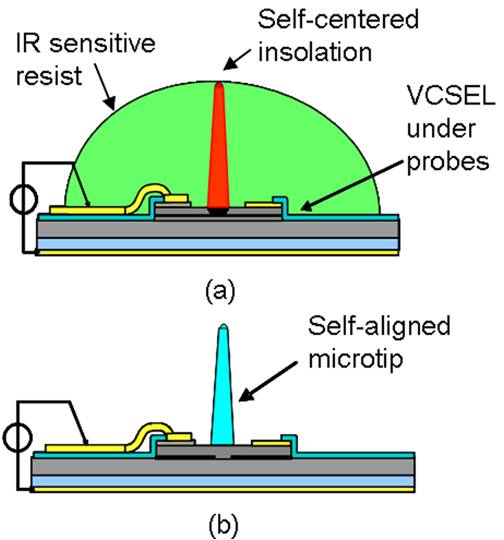 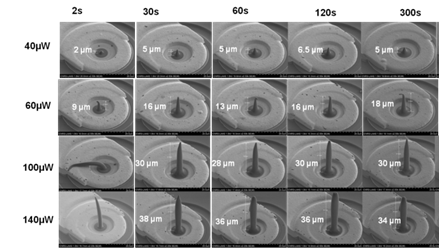 We have developed a low-cost polymer-based technique for the fabrication of a Micro-Optical-Electrical-Mechanical Systems (MOEMS) in view of dynamic focusing of VCSEL beam.

A simple method based on a SU-8 double exposure is proposed for the collective integration of small footprint transparent suspended membranes on vertical laser diodes arrays.  A complete optimization of the full circular membrane has been led thanks to a thermo-mechanical simulation tool (COMSOL). Our study shows that a 2.7 µm vertical displacement is possible with an applied thermal gradient of 100°C. [SPIE Proc. 771620, 2010]. This value is suited for a significant active beam vertical tuning given by optical modelling (coll. FOTON).  We recently demonstrated that this kind of MOEMS can be thermally actuated with a vertical displacement of ~0.2 µm/W over a maximal range of 8 µm. As a wide range of initial gaps between the membrane and the laser source can be chosen, this approach opens new insights for dynamic control of VCSEL beam waist position and for tunable VCSELs fabrication. [B. Reig et al, Journal of Micromechanics and Microengineering, 2012]  [Journal  of Micromechanics and Micro-Engineering, 22 065006, 2012]. Tri-dimensionnal electro-thermo-mechanical modelings recently confirmed these results [SPIE Proc. Paper 9130- (2014)]. Finally, first results on lens integration on multimode VCSELs show a beam focusing at a distance of 300µm suitable for an integration in a fluidic chamber [Invited talk MicroOptics Conference MOC'13, Tokyo, Japan, 27-30 oct 2013] [Invited talk IEEE OMN'13 conference, Kanazawa, Japan, 18-22 aug 2013]. 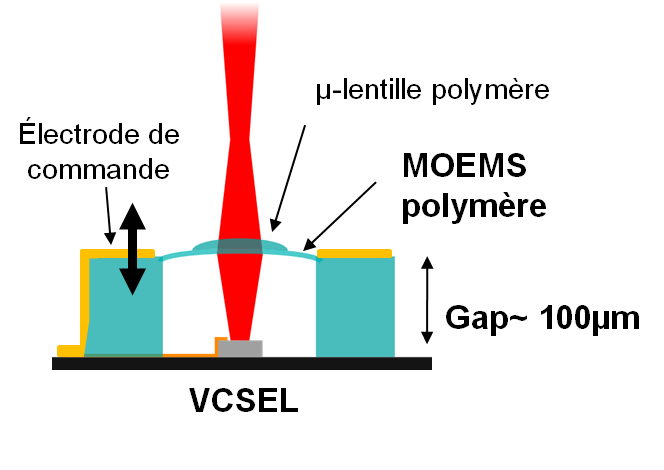 In the framework of previous FunFACS european project, the electrical properties of broad-area 850nm top emitting VCSELs have been investigated in order to improve carrier injection uniformity in their active zone. We have demonstrated using an electrical simulation tool that a multi-point localized injection design associated with a spreading layer at the top of the device (ITO) can lead to a significant improvement of carrier injection and on its spatial distribution. The electrical contrast achievable by applying this method with localized etchings has been experimentally measured. Stripe-shaped devices with output power up to 50mW in a continuous-wave operation at room temperature have been demonstrated. (E.Havard PhD thesis) [European Physical Journal D, 59, 1, 2010].

We are now studying the properties of alternative TCO layers (Transparent Conductive Oxides) such as ZnO:Al deposited by ALD in collaboration with NCKU Taïwan in the framework of AZOLED project. [SPIE proc. Paper 9137-49, 2014)]

We previously investigated the lateral waveguiding properties of a VCSEL for lateral detection application to integrated power monitoring. Spontaneous and Amplified Spontaneous emissions guiding in the plane of the cavity has been modelled and demonstrated experimentally in collaboration with Yann Boucher (ENIB-RESO-Brest). Thanks to the use of a Schottky contact, the threshold and the thermal extinction of the lasing emission can be clearly identified on the lateral signal. The monotonous increase of the photocurrent between threshold and extinction makes this lateral detection suitable for integrated VCSEL power monitoring with a higher level for the photodetected light. [Electron. Lett. Vol 41, 3,2005] [ Optical and Quantum Electronics, Vol 38, n°4-6,2006] . Current work focus now on a better correlation with the top-emitted light and optical feedback exploitation for velocimetry or distance measurement (coll. with OASIS team).