We have defined a passive testing approach for applications and services in mobile computing systems. The system under test (SUT) is run in a simulated environment. Its execution traces are collected and automatically checked against key properties. To model the properties, we have developed a graphical scenario language, called TERMOS, representing interactions in mobile settings. TERMOS is a formal language based on UML Sequence Diagrams. Various verification artifacts (positive and negative requirements, test purposes) can be specified and then used for checking the traces. A scenario contains two views: (i) a spatial view, depicting the dynamically changing topology of system nodes as a sequence of graphs, and (ii) an event view representing the communications between nodes. The checking of traces against scenarios then combines graph matching and event order analysis. The graph matching part searches for occurrences of the target sequence of spatial configurations [NHR10], with some optimization for the average case [ARW13]. Event order analysis relies on an automaton-based semantics of sequence diagrams [WMRHN10], which was defined based on a review of alternative semantics [MW11].

TERMOS has been integrated into UML support technology [AWR13]. A profile has been developed for the editing of scenarios, as well as an Eclipse plugin for the automated checking of traces. We have demonstrated the approach on a case study, a group membership protocol in ad hoc networks. 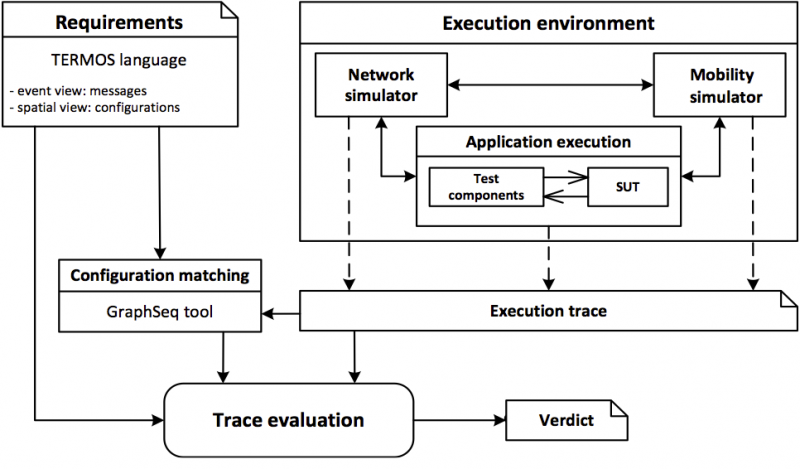 Checking a trace against a TERMOS scenario