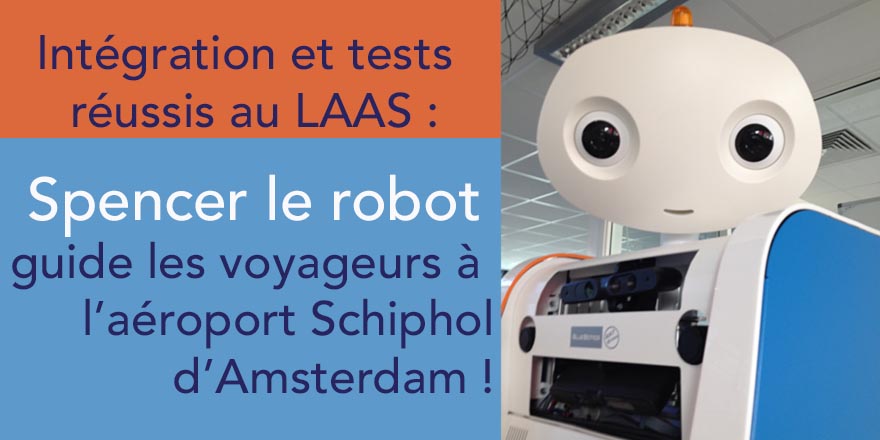 After more than three years of construction and programming (thanks to the RIS team), Spencer the robot completed various tests at Schiphol this month

During the various tests Spencer scanned boarding passes from passengers and guided them to the correct departure gate. Spencer heads off automatically and the passengers follow the robot, which adjusts its speed to that of the group, avoiding obstacles and informing passengers of the remaining distance to their departure gate. When they get there, Spencer reports this via a screen.

Every day, some passengers can miss their connecting flight due to delays, language barriers or because they lose their way. Considering that 70% of KLM passengers transfer at Schiphol, we are continually seeking ways to have this process run more smoothly. KLM believes that robotics will play an increasingly important role in aviation in the coming years. We are assessing how robotics can be incorporated into our processes in various areas. This will supplement the service offered by our airport staff, who will then have more time to assist passengers with more challenging needs

We are excited to have realized and present SPENCER which is the first socially-aware robot that has ever been deployed at an airport. What makes SPENCER unique is that it can deal with social situations between people. It can ’see' and analyse people nearby with its sensors. It reasons about possible social relations between people like whether they are a family or group. It also learns about and then complies to social rules and act in a human-friendly way. These abilities are important for many intelligent service robots to be used by people such as future household robots, collaborative factory assistants, or self-driving cars. Guiding people at an airport is a good example of a challenging everyday problem. It is a very busy environment with many people and there is a lot of time pressure while the robot has to operate safely and in a socially acceptable way

During the coming period, the partners involved in this project will evaluate the test results and discuss the next phase.

Partners
This project was co-funded by the European Commission as part of its 7th Framework Programme*. In addition to KLM, the project involved SME Bluebotics, the universities of Freiburg, Munich, Twente and Orebo, RWTH Aachen University, the Centre National de la Recherche Scientifique (CNRS) and Amsterdam Airport Schiphol. The project is coordinated by the University of Freiburg.

The name Spencer is derived from “Social situation-aware PErceptioN and action for CognitivE Robots”.