Detection and tracking have mainly been addressed via probabilistic and Monte Carlo supervised classification and filtering methods, respectively.  We have performed people detection from heterogeneous features via single-class methods such as boosting (A.A. Mekonnen’s thesis).  Multiple-class methods like ``random forest'' have been used to detect body limbs for posture recognition (L. Marti’s thesis).  As for tracking, an original fusion of vision and RFID in a reversible jump Monte Carlo Markov Chain (MCMC) particle filter enabled the real time robust navigation of a robot in a cluttered human environment [Mekonnen-et-al_CVIU2013] (A.A. Mekonnen and T. Germa’ theses).  We could track and re-identify people from a network of cameras with non-overlapping field of views, thanks to the coupling of local tracking and identification systems (one per camera, entailing a mixed-state particle filter) with a MCMC based supervisor in charge of the association of “tracklets” [Meden-et-al_BMVC2012] (B. Meden’s thesis).  Recent work has concerned the reconstruction and tracking of posture from single and multiple Kinect sensors by stochastic filtering or smoothing (L. Marti and J.T. Masse’ theses). 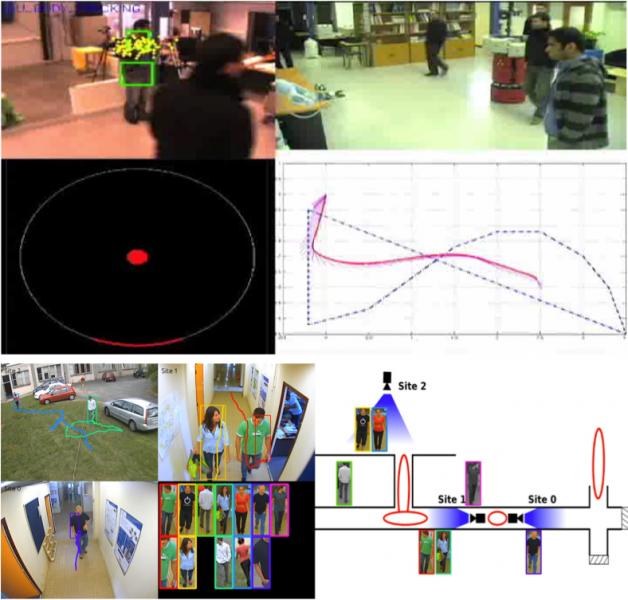 (Top) Vision & RFID based tracking and coordinated motion of a tour-guide robot into crowds.
(Bottom) Visual tracking and re-identification of people from non-overlapping cameras.