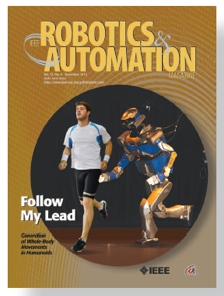 The illustration of  the article "Dancing Humanoid Robots: Systematic use of OSID to Compute Dynamically Consistent Movements Following a Motion Capture Pattern" (Gepetto team) is on the front cover ot the December issue of the IEEE Robotics & Automation magazine.

In October 2012, the humanoid robot HRP-2 was presented during a live demonstration performing fine-balanced dance movements with a human performer in front of more than 1000 people.

This success was possible by the systematic use of operational-space inverse dynamics to compute dynamically consistent movements following a motion capture pattern demonstrated by a human choreographer. The first goal of this article iwas to give an overview of the efficient inverse-dynamics method used to generate the dance motion.

Behind the methodological description, the second and main goal of the article was to present the robot dance as the first successful real-size implementation of inverse dynamics for humanoid-robot movement generation. This gives a proof of concept of the interest of inverse dynamics, which is more expressive than inverse kinematics and more computationally tractable than model-predictive control.

It is, in our opinion, the topical method of choice for humanoid whole-body movement generation. The real-size demonstration also gave us some insight of nowadays methodological limits and the consequent future needed developments.