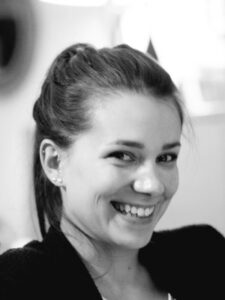 Her research work "Proposals of communicative strategies for an efficient, fluid and sustainable Human-Robot joint action" within the framework of her thesis was rewarded by the international scientific council of the MSHS-T for its intrinsic qualities as well as for its pluri and interdisciplinary character.

Kathleen defended her thesis on December 14, 2021 under the supervision of Michèle GUIDETTI of the CLLE - "Cognition, Languages, Ergonomics" of the Jean-Jaurès University of Toulouse and Rachid ALAMI of the RIS team of the LAAS-CNRS.

For more information, read the article on the MSHS-T website.

*Each year, the MSHS-T awards a thesis prize to distinguish outstanding interdisciplinary research work that has at least one discipline in the humanities and social sciences at its core. The award recognizes a thesis defended in a research unit affiliated with MSHS-T. The winner is awarded €1,500 and is invited to present his or her work at the MSHS-Toulouse.