Rapid detection of a cancer biomarker by a microfluidic chip

Researchers from LAAS-CNRS, in collaboration with the Toulouse Cancer Research Centre, have shown how μLAS microfluidic chip technology can concentrate and measure microRNAs, cancer biomarkers, in less than a minute.

MicroRNAs (miRs) are short fragments of RNA that play a role in gene expression. Their concentration is strongly altered in cancer patients, and this is why miRs are a target of choice for diagnosis and monitoring of patients, provided that a detection and measurement method is sufficiently sensitive and rapid to be used clinically. Researchers of MILE - MIcro-Nanofluidics for Life science and Environment team at LAAS-CNRS, in collaboration with the Toulouse Cancer Research Centre, have made a major breakthrough in this direction, by detecting miR-21 in less than a minute using a microfluidic chip. These results are published in the journal Biosensors and Bioelectronics.

The μLAS microfluidic chip technology enables the concentration and separation of nucleic acids of targeted sizes. The solution containing microRNAs, coupled with fluorescent molecular probes, is fed into a funnel-shaped microfluidic channel, while an electrophoretic force1 is created in counterflow. By adjusting the pressure and electrical voltage, the molecule to be concentrated accumulates at a point in the microchannel. Fluorescence measurements are then made at this point by placing the chip on an optical microscope.

In order to test a clinical use of this technique, the device was used to measure the concentration of miR-21 from biopsy samples of pancreatic cancer patients. The measurements performed showed that the results were consistent with those obtained by today’s gold standard RNA analysis method (RT-PCR). In addition, the μLAS technology achieves a sensitivity of 2 pM (picomole/L) in 30 seconds, which represents a good compromise between measurement speed and sensitivity compared to the technologies used today.

Researchers are now working to further increase the sensitivity of the technology. This could be increased by a factor of 1000 by optimising the geometry of the microfluidic chip to improve the accuracy of microRNA monitoring tests. 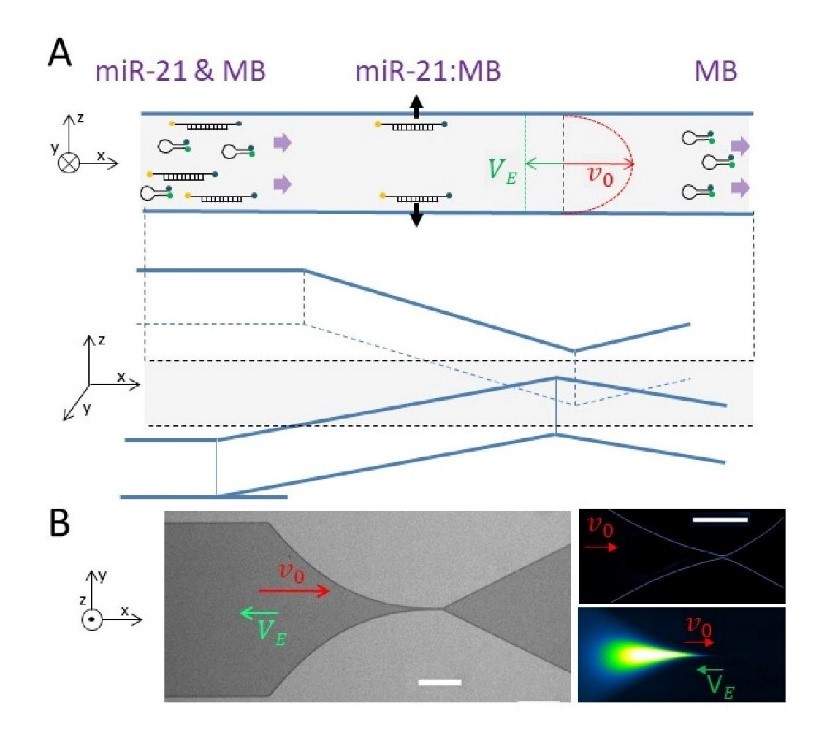 A) Diagram of the µLAS technology. In a funnel-shaped microfluidic channel, the flows are controlled with a hydrodynamic flow (v0) and an opposing electrophoretic velocity (VE). This action specifically concentrates the complex formed by miR-21 associated with a fluorescent reporter (MB) and removes the reporter alone.
(B) The left panel shows an optical photograph of the funnel (scale bars correspond to 200 microns).
The two images on the right correspond to fluorescence microscopy images with the initial condition (hydrodynamic field alone, top panel) and simultaneous electric field after 30 seconds of concentration (bottom panel)
© Aurélien Bancaud, LAAS-CNRS

[...] read the article on INSIS CNRS website (in french only)