Implantable neural prosthetics devices offer a promising opportunity for the restoration of lost functions in patients affected by brain or spinal cord injury, by providing the brain with a non-muscular channel able to link machines to the nervous system. Nevertheless current neural microelectrodes suffer from high

initial impedance and low charge-transfer capacity because of their small-feature geometry. In this work, we have developed PEDOT-modified neural probes based on flexible substrate capable to answer to the three critical requirements for neuroprosthetic device: efficiency, lifetime and biocompatibility. We propose a simple procedure for the fabrication of neural electrodes fully made of Parylene-C, followed by an electropolymerization of the active area with the conductive polymer PEDOT that is shown to greatly enhance the electrical performances of the device in terms of impedance and charge capacity. In addition, the biocompatibility and the very high SNR exhibited during signal recording, make our device suitable for long-term implantation. To stiffen the flexible probes to make them rigid enough to be implanted in the brain, a specific protocol was developed to deposit silk fibroin on the surface of the Parylene device. 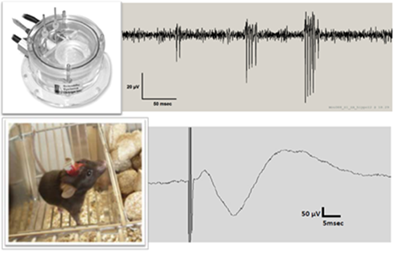