The team is interested in the cooperative, decentralized and distributed aspects of decisions, related to the presence of several decision centers that interact in a number of applications. The team conducts research in multi-objective mathematical programming. Within multi-agent optimisation problems, the team is also exploring the search for equilibrium solutions within the meaning of game theory that are also non-Pareto dominated. Finally, the team is interested in distributed combinatorial optimization, especially for reasons of security or respect of private data. Interdisciplinary researches on human factors in combinatorial optimization have also been carried out.

Lower and uper bounds for a biobjective integer program 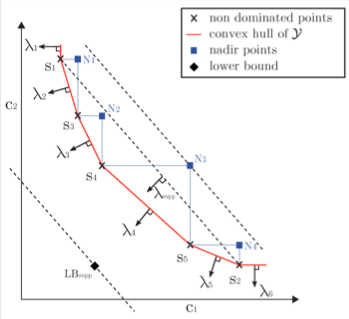 The single-objective case is here extended to multiple objectives. Considering the Pareto dominance, the team mainly focuses on a posteriori methods which aim at generating the whole set of non-dominated points in the objective space and a solution for each of them. The ROC team aims to design novel multi-objective mathematical programming approaches (branch-and-cut, column generation) and metaheuristics.

Some publications on multi-objective combinatorial optimization

Some publications on multi-agent and privacy preserving combinatorial optimization