The scientific context of the MH2F team deals with the interaction of electromagnetic fields and fluids at the micro and nanoscales, and notably at the molecular and cellular levels for health and life sciences. More precisely, it is based on the possibility of microwaves and millimeterwaves to penetrate the matter. The crossed material may be probed due to its electrical properties, which have modified the electromagnetic waves. Microwave dielectric spectroscopy is consequently very attractive as a non-destructive and contact-less analyzing technique and widely developed since decades at the macroscale. 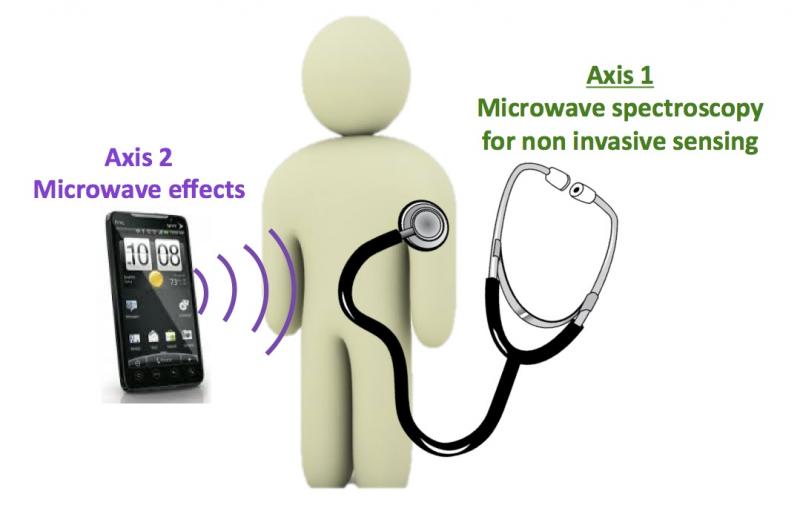 The major objective of the MH2F team is therefore to take advantages of Microwave Dielectric Spectroscopy - MDS - at the microscale to investigate fluids for various applicative domains such as chemistry, environment, biology, and medicine notably. At the cellular level, the frequency domain of micro and millimeterwaves permits indeed to overpass the bi-lipid membrane of biological cells, giving access to the interior of the cells and maybe even penetrating the nucleus of the cells.

In complementarity, high frequency signals are still creating large controversy due to their potential impacts on the living. A report of the International Commission on Non-Ionizing Radiation Protection (ICNIRP) concluded in 2009 that no consensus between the different studies was yet obtained on RF genotoxicity and that appropriate dosimetry was required. To fulfill such a gap, MH2F team is also developing miniature metrology and applicators to evaluate the effect of RF signals on the living. This constitutes our second objective.

Therefore, we are developing:

Our target is to provide with MDS new analyzing tools of the living to the biologists and physicians at the molecular and cellular levels, in order to give them access to new bio-parameters, to a new way to observe the living, in complementarity to the existing techniques, which are mainly based on optics or X-rays.

MDS presents indeed the breakthroughs of non-invasivity, a richness of information in the RF signatures, integration for Lab-on-Chips or massive parallelization, real time monitoring ability and compatibility with in/ex vivo implementations. In collaboration with biologists, we are therefore defining the limits of the technique compare to the targeted application, i.e. non-invasively observe living matter and extract pertinent information.

Strong investigations in close collaboration with biologists are consequently on going in order to respond to the following questions: May RF non-invasively sense cells in their culture medium? Is the RF signature specific and to which extent? May MDS discriminate cells and why? May MDS discriminate pathological state of cells and why? What about reliability issues of the MDS technique applied to living matter? May the technique be applied to the real time monitoring of biological processes? Which processes may be sensed?

To answer these questions, we are following a progressive approach in term of model complexity, in conjunction with the development of appropriate RF device architectures, heterogeneous microtechnologies and multifunctional metrologies. We are investigating elementary constituents of cells such as biomolecules (amino acids, carbohydrates, nucleic acids...), looking at cells themselves both at the population and also at the single cell levels, and even up to the tissue.