The filtration has a central interest in various industrial processes. We can cite water purification, drilling solids concentration in the oil industry or cell and proteins extraction in the food-processing industry. The joint problematic consists in extracting fluid from a dispersed suspension of coloidal particles. One of the main subsequent problem of filtration is the creation of the cake filtration which clogs the pores dedicated to let the liquid pass through. The clogging topic includes particularly cake formation, structure, porosity and fragility. Various works have been published about clog formation, structure and dynamics in microchannels with microparticles, see e.g. [Wyss et al., PRE (2006), Linkhorst et al., Scientific Reports (2016)].

The aim of this project is to investigate the clogging mechanisms of nanometric pores with nanometric particles. By decreasing the length scale the Brownian motion will be increased. The formation, structure and fragility of the clog are the central points of this project. Several parameters such as ionic strength or pressure in the pores can be studied. To isolate some physical phenomenon we use a model of pores using nanochannels. Ten to twenty nanochannels connecting two microchannels are designed on a silicon-glass chip fabricated by photo-lithography (see fig. 1) which is inserted in a specific support (see fig. 2). A colloidal suspension of fluorescent particles (100 to 1000 nm) is injected in one of the microchannels. A pressure drop through the nanochannels is imposed. Using fluorescence microscopy we are able either tracking the particles in the flow or capturing the clog formation. Figure 3 shows an example of clog formation.

This work is funded via a Chaire d’attractivité of Université Fédérale Toulouse Midi-Pyrénées (IDEX-UNITI). It is led by Jeffrey Morris (Professor at City University of New York) and conducted in collaboration with Patrice Bacchin (Professor at Laboratoire de Génie Chimique, Toulouse). The implied people from the LAAS are Olivier Liot and Pierre Joseph. 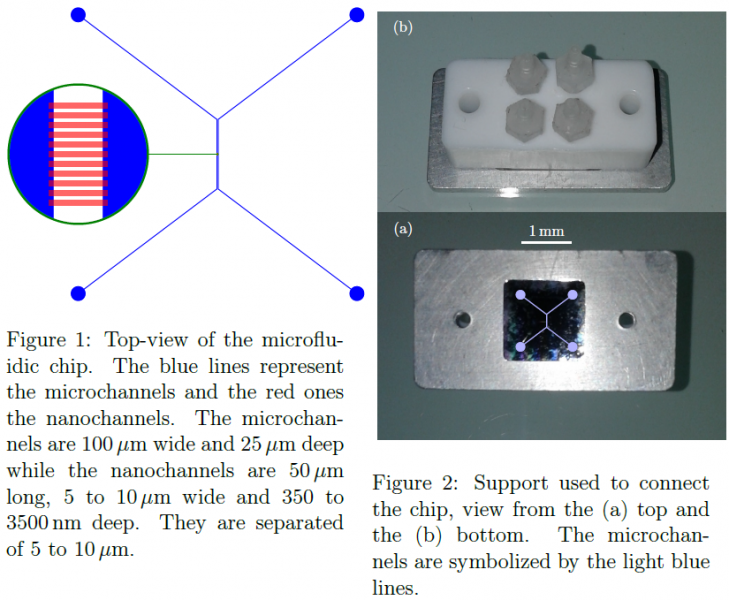