The MICA team research involves the development of silicon-based microtechnologies in order to integrate electrochemical principles for the liquid phase measurement. They aim to study new detection/transduction phenomena in order to cope with liquid (or assimilated) samples analysis as well as cellular metabolism monitoring. Two research axes have to be emphasized.

The ChemFET microsensor is deviated from a microelectronic flagship microdevice, i.e. the metal-oxide-semiconductor field effect transistor (MOSFET), for the in liquid phase analysis. As a result, it is fully compatible with silicon-based technologies and allows the integration of potentiometric detection/transduction principles. It is especially adapted to the detection of electrically charged chemical species such as ions, to pH measurement and associated applications. It as already been responsible for the industrial realisation of "all-solid" pH microsensor but research efforts have still to be brought in order to improve technological reliability and detection properties, to go further in term of integration and to broaden the detection range to new chemical, biochemical and/or biological species.

During the last years, LAAS research works dedicated to the ChemFET platform were associated to technological integration: integration of passivation layers at wafer level, integration of fluidic microstructure, integration of (bio)chemically sensitive layers, study of integrated reference or polarization microelectrodes,... They were performed through different projects in the frame of medical and environmental applications.

Current studies involve the ChemFET technology development for the nitrogen cycle monitoring in the frame of agronomical applications (2014-2018: project FUI INNOPERF BLE in collaboration with AGIR-INRA and AGRONUTRITION and SIREA companies). Research works aim to the realisation of all-solid ISFET (ion-sensitive field effect transistor) microsensors for the soil analysis and more especially for the detection of nitrate NO3- and ammonium NH4+ ions. Their final objective is associated to the optimization of fertilizers supply in the frame of wheat culture. 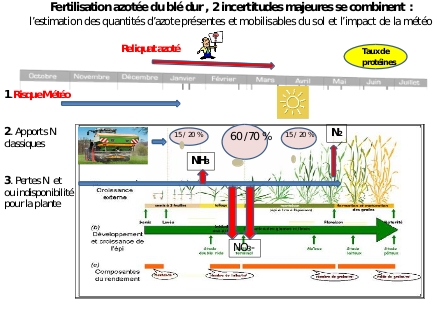 Electrochemists have already developed electrodes, microelectrodes and ultra-microelectrodes in order to use amperometric detection/transduction principles at their best for the liquid phase analysis. Nevertheless, miniaturization efforts have been only focused on the work electrode. As a result, research works have to be brought to the realisation of electrochemical microcells (ElecCell), allowing the functional integration of the work, auxiliary and reference (micro)electrodes. This concerns especially the development of the Au – Pt – Ag/AgCl ElecCell platform in order to detection chemical, biochemical and/or biological species in liquid phase.

As previously done for the ChemFET technology, LAAS research works associated to the ElecCell one are dedicated to the technological integration: integration of electrochemically active layers, integration on rigid (silicon, glass) or flexible (PET) substrates, integration of passivation layers at wafer level, integration of fluidic microstructure,... They were performed through different projects in the frame of medical and environmental applications.

Current studies involve the ElecCell technology development for the monitoring of cellular metabolisms.

First, in collaboration with ISM laboratory in the frame of the ANR project NANOMITO (2012-2015), The (Pt – Pt – Ag) ElecCell technological platform has been developed for the analysis of mitochondrial cultures through the study of respiration phenomena as well production of reactive oxygen species (ROS). Here, the main goal is to integrate a multi-sensor microsystem for the simultaneous electrochemical detection of molecules characteristics from mitochondria biomechanisms (O2, H2O2,...). In order to be able to detect nanomolar concentrations, it has been necessary to realize a working microelectrode array in order to improve the signal-to-noise ratio, as well as to develop a functionalization process based on porous black platinum (Bl-Pt) in order to increase the electrochemically active surface. Results obtained up to now demonstrate the feasibility of the metabolic monitoring of mitochondrial cultures. Thus, currents works aim to understand mitochondrial metabolism associated to the ROS production and finally to cell apoptosis. In the future, we plan to cope with the single mitochondrion analysis through the development of (Pt – Pt – Ag/AgCl) electrochemical nanocells. A collaboration has been established with CRCT in order to apply these works to the understanding of the cellular resistance to chemotherapies.

Second in collaboration with UQAM (Quebec university in Montréal - Canada) and in the frame of the ANR project DOLFIN (2014-2017), the (Pt – Pt – Ag) ElecCell technological platform has been developed for the monitoring of algae cultures in the frame of environmental applications. Here, the main goal is to study the algae metabolisms such as respiration, production of acid/basic or oxidant species, and finally photosynthesis. This application has required the development pH-sensitive working microelectrodes based on iridium oxide IrO2 and tungsten oxide WO3, the ElecCell technology adaptation to transparent glass substrate, and the integration into fluidic microstructures in order to cope with liquid sampling. Thus, through the realisation of a lab-on-glass, the of respiratory and photosynthetic metabolisms of algae cultures was demonstrated and applied to the detection of herbicides such as Diuron. In the future, we plan to use both electrochemical and optical detection principles for the algae cultures monitoring. This will be obtained through the co-integration of electrochemical microcells (ElecCell) and organic light emitting diodes (OLED) in order to study simultaneously photosynthesis and bio-fluorescence associated to algae.