Autonomous systems have to cope with various execution environments while guaranteeing safety, and in particular when they interact with humans, as is the case for robotic systems. Such critical systems are difficult to validate due to their high complexity and the fact that they operate within complex, variable and uncertain environments in which it is difficult to predict all possible system behaviors. As a result, autonomous systems have to be equipped with means for context-dependent safety enforcement. We consider here a device called a safety monitor, which has access to the necessary means for context observation (i.e., sensors) and is able to trigger, when necessary, appropriate safety enforcement.

We have addressed the process for eliciting safety rules that will be checked by a safety monitor during operation, considering the system as a black box [MBGPR12]. The proposed process is based on safety constraints identified through a hazard analysis using HAZOP-UML. The constraints are formalized and analyzed to identify safety rules. We distinguish initiative rules and restriction rules [MBGPR13]. An initiative rule launches an action to change the state, when it has been detected that the system has entered a warning (or safety margin) state. On the contrary, a restriction rule inhibits certain state changes, e.g., by means of an interlock device or by request filtering. This systematic process is based on the use of graphs and formal logic to determine safety margins and possible rules. 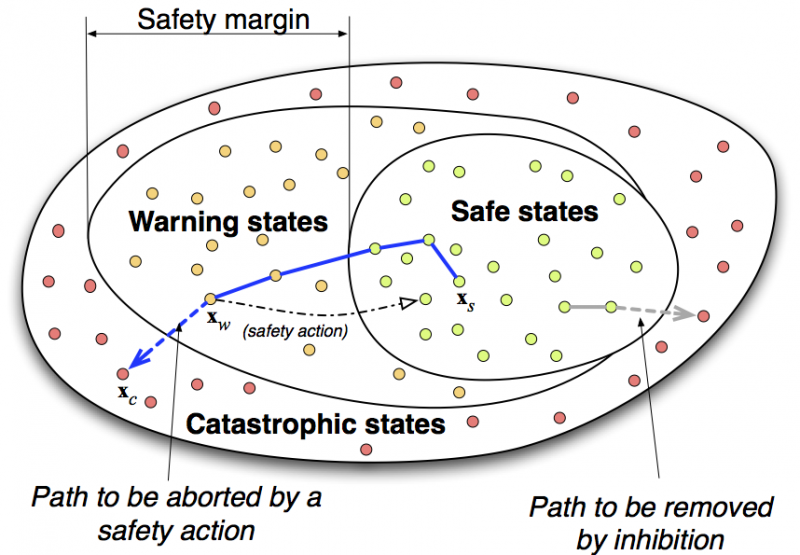 We have also investigated the case when the system can be considered as a white box. The safety requirements are defined in a safety monitor that can control the internal behavior of the system. Formally, the symbols of the automaton implementing the monitor (Â) are transitions of the automaton (A) defining the controlled system [CM09]. An operator composing A and Â allows a safe behavior of the system to be obtained [CM10]. This approach facilitates the expression of complex safety rules. It can be used to implement a functional safety approach (IEC 61508) [CM11].