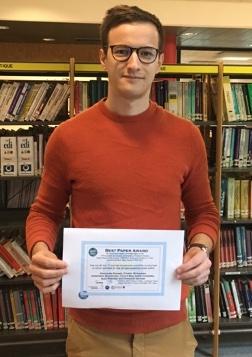 Amirouche Oumaziz, PhD student within the Power Management System Integration – ISGE team at LAAS-CNRS and the CS group (Static Converters) at LAPLACE, has received the Best Paper Award at the 32nd European Symposium on Reliability of Electron Devices, Failure Physics and Analysis - ESREF 2021. The conference was held between October, 4th to 7th 2021 in full virtual mode.

Amirouche was awarded for his paper « Fast cut-off, low I2T and high temperature monolithic on-chip fuse on silicon substrate for new fail-safe embedded power switch » in which new fuses on a silicon substrate were proposed and realized. The devices are intended for the protection of fail-safe switching cells in power converters, in order to allow the power converter reconfiguration.

The work is carried between ISGE team at LAAS-CNRS, CS group at LAPLACE and the platforms of these labs, in collaboration with 3DiS Technologies company, founded at LAAS-CNRS. The PhD thesis is supervised by Frédéric Richardeau (CS/Laplace), Abdelhakim Bourennane (ISGE/Laas) and Emmanuel Sarraute (CS/Laplace).

His paper was also been selected by the ESREF 2021 committee to present his work as invited speaker at the 39th International Symposium on the Physical and Failure Analysis of Integrated Circuits (IPFA) which will take place in July 2022 at Singapore.